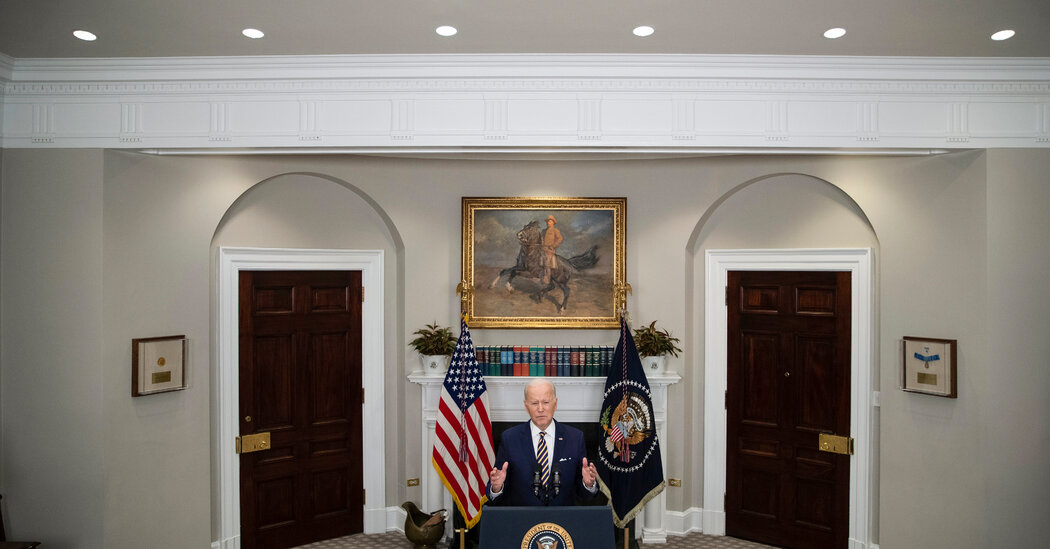 We’re covering the US sanctions on Russian oil and the fiercely contested presidential election from South Korea.

President Biden announced a ban on imports of Russian oil and natural gas into the US, increasing the economic penalties that could result domestically and around the world.

The move could lift domestic gas prices above their record-high national average of $4.17 a gallon and was coordinated with Britain, which announced it would end imports of Russian oil by the end of the year.

Russian President Vladimir Putin signed a package of measures aimed at easing the pain of sanctions and the departure of international businesses. These include stronger pensions and easing of rules for small and medium-sized businesses.

in Ukraine: According to the United Nations, two million people have fled the country in what it calls the fastest growing refugee crisis in decades. After days of unsuccessful evacuation efforts due to Russian attacks, at least one humanitarian corridor lasted long enough to allow hundreds of civilians to escape the war-torn city of Sumy, east of Kyiv.

South Koreans are voting today to elect their 20th president amid widespread voter discontent over issues such as North Korea, job opportunities and a growing generational divide.

Of the 14 candidates, Lee Jae-myung from the Progressive Democratic Party, and Eun Suk-yol from the conservative People Power Party, are clearly leading. There is a fractured race between the two, although their ideological differences are vast and neither is very popular. Some voters have called the election “a contest between the impossible”.

See also  Is Taiwan next? - the new York Times

Lee is a flamboyant former human rights lawyer who built his reputation as governor by expanding social benefits to young, unemployed citizens. Yoon is a former prosecutor who resigned and began to criticize outgoing President Moon Jae-in.

Young, broken and angry voters, frustrated by housing prices, lack of job opportunities and rising income gaps, will cast the most decisive vote.

major issues: Housing affordability has become one of the most pressing problems for South Koreans, and both candidates promise to supply millions of new homes. Lee favors a New Deal-like approach with expanded welfare and universal basic income. Yoon prefers deregulation and market based solutions.

Worth quoting: “The key point to watch in this election is whether progressives will step down after five years,” said Heo Jin-jae, a research director at Gallup Korea.

A boom for Afghan smugglers

Smugglers have long dominated the economy in Afghanistan’s desolate Nimruz province, which borders the country with Iran and Pakistan. Now, as hundreds of thousands of Afghans are trying to flee their Taliban-controlled homeland, business has flourished thanks to business leaders.

Times reporters spent 24 hours with one of the few prominent smugglers, referred to simply as H because of the illegal nature of his business. His efforts to transport migrants to Iran reflected the frenzied atmosphere that has recently engulfed this southwest region of Afghanistan.

Fearing an influx of Afghans after the Taliban came to power, Iran strengthened its security forces along the border. The Taliban have also tried to block H.K., raid safe houses and patrol the desert. Even after this the smugglers are not deterring.

“The Taliban cannot close our business. If they tighten security, we’ll charge more and get more money,” H. said. “We’re always one step ahead.”

Atmosphere: With migrants regularly looking to flee the Taliban or the country’s economic collapse, Zaranj, a city in which almost everyone engages in the smuggling trade, is vibrant. Newcomers buy kebabs from street vendors, peruse shops and sit around plastic tables, eager to learn more about the difficult journey ahead.

Tane mahuta, an ancient, 177-foot-tall tree named after the god of the forests in Māori mythology, is threatened by the slow creeping of an incurable disease. Here’s how Māori researchers stepped in to save it.

The tales of tech titans and corporate greed often get the Hollywood treatment – ​​the 2010 Facebook movie “The Social Network” may be the poster child of the genre. Now, it seems that every streaming service with its own ripped-from-the-headlines is a troubled entrepreneur, writes Amanda Hess, a critic at large for The Times.

The show’s central figures share a trajectory of rise and fall, and “self-aggrandizement comparisons to Steve Jobs,” writes Hayes. The new consensus is that there is really something wrong with these people who are drawn to start-ups because they are brutal egoists.

And the appetite for technological disaster is on the rise: The case of Holmes has been recreated in a book, several podcasts, and an HBO documentary. A film starring Jennifer Lawrence is in the works.