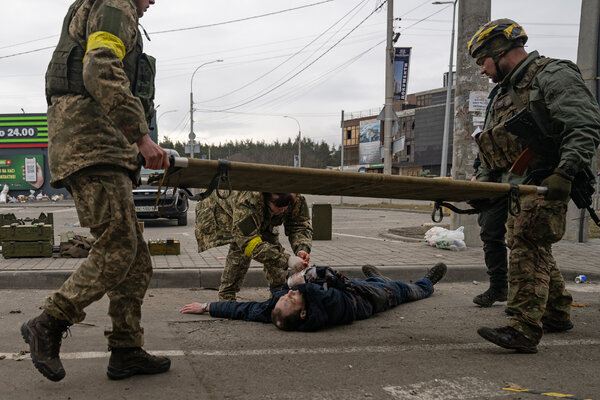 The people of Mariupol, Ukraine, ravaged by the city’s blaze, cut off from the heat by cold nights, and starved of food and water, are trapped under a Russian siege.

In interviews, residents and local officials in Mariupol, a port on the Azov Sea, described the state of nightmares after five days of shelling by Russian forces around the city. On Sunday, city officials said they would try to restart the evacuation effort, which had been called off a day earlier due to Russian attacks.

“There’s no electricity, no heating, no telephone connection. It’s utterly appalling,” said Petro Andryshchenko, an adviser to the mayor of Mariupol. “People drink from puddles in the streets.”

He said the shelling had destroyed the city’s left bank district, making it “unfit for human life”. He said the city was unable to accurately count the dead or help many injured because of the barrage.

“It just never stops,” he said. “Everyone who tries to go out puts their lives at risk. So the mayor cannot ask people to do this, it would be like sending people to a certain death.”

Videos showed explosions and fires in residential areas of Mariupol, as well as the ruins of shops and cars around the city.

“The shelling is continuous and random,” said Diana Berg, a resident. “At any time, when you’re on the road, a rocket can land next to you.” She said people are still bravely taking to the streets to light the fires for the summer.

On Saturday, city leaders halted a planned evacuation because of the shelling, and accused the Russian military of violating a temporary ceasefire intended to allow the city’s nearly half a million residents to flee. President Vladimir V. Putin blamed Ukraine for sabotaging humanitarian routes.

The head of the Donetsk Regional Patrol Police, Mikhail Vershinin, said several hundred cars had planned to convoy to leave the city through the humanitarian corridor.

“As soon as we sent the cars back home, the offensive started in that area,” he said. He said the city was facing a “humanitarian disaster”.

The mayor’s adviser, Mr Andryshchenko, said city officials were wary of the Russian military, even as they gathered people for the planned evacuation, and could not send residents out because the route was too dangerous. . “There was no ceasefire for the entire length of the corridor and Russian troops continued to attack our positions,” he said. “That’s why we didn’t allow people to board the buses.”

City leaders did not give up, Mr Andryshchenko said, and were trying to negotiate another evacuation attempt through the blockade. “This is literally our last hope,” he said.