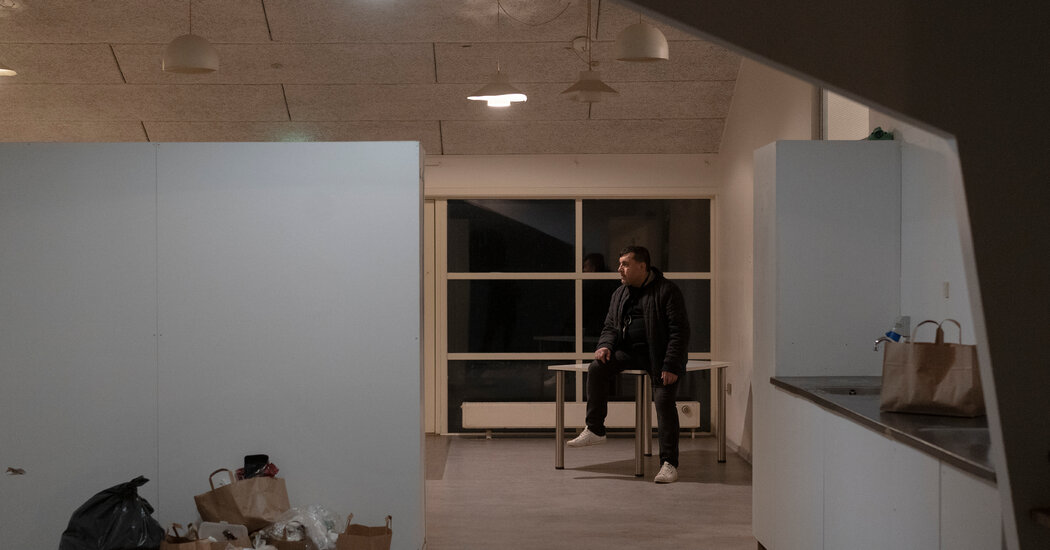 These Syrian refugees can’t stay in Denmark, but they can’t go home

IKAST, Denmark — Haitham Kurdi, a 61-year-old Syrian asylum seeker, has been in a Danish deportation center for nearly six months, where relatives say he has become depressed and barely eats. He is suffering from tics and has started talking to himself.

Mr Kurdi fled the Syrian civil war in 2015 after his adult son, Mohamed, had arrived a year earlier. He was initially granted temporary asylum, but authorities revoked his residence permit last year after deciding it was safe for him and others in the Damascus region to return home.

“Being here is like dying slowly,” Mr Kurdi said in a recent interview from his small, dilapidated room at the Kershovedgaard center in the northern Danish city of Ekast, where some asylum seekers have been rejected . But the prospect of returning to Syria is so dire, he said, that he will never go back.

Around 2015 hundreds of thousands of Syrians took refuge in Europe, with Denmark taking in more than 30,000 of them. But since then no European country has gone as far as Denmark to make Syrian refugees feel unwanted.

With the escalation of a new refugee crisis in Europe, the warm welcome from Ukrainians fleeing Russian offensive has sparked both sympathy and bitterness in the Middle East and Africa, where many feel that European nations have taken a stand against the newcomers. He has taken a more compassionate stance than them. In recent years Arabs, Muslims and Africans have turned to asylum seekers trying to reach the safety of Europe’s shores.

In 2019, the government began sending letters to more than 1,200 people in the Damascus region, saying that after granting them residence permits, it was re-evaluating their temporary asylum status. Since then, more than 100 Syrians like Mr Kurdi have revoked their residency and scrapped the appeals process, essentially making it illegal for them to stay in the country.

Some of them have been sent to multiple deportation centers across the country, where their movements are tightly controlled. But Denmark cannot deport them because it does not have diplomatic relations with Syria.

So dozens of Syrians hang in the balance, facing indefinite detention with the threat of deportation at their heads.

Revoking the residence permits of some Syrians, Denmark has become the first European country to rule that they are no longer eligible for asylum despite threats to return home.

Security and human rights experts say Denmark’s assessment of the security situation in the Damascus region misrepresents the risks of dictator Bashar al-Assad returning when he was in power. According to human rights groups, the returnees have faced extortion, torture, sexual violence and forced disappearances.

The UN refugee agency has called on governments around the world not to return Syrians “to any part of Syria”. Denmark’s measures have worried many European lawmakers and some European countries, such as Britainhas clearly stated that Syria remains unsafe for the returnees.

“My clients have been taken hostage by the Danish authorities to send a message to the world that Denmark is the worst place to go as an asylum seeker from Syria,” said Niels-Erik Hansen, a lawyer based in Copenhagen , who is representing Mr. Kurdi and other Syrians.

Government spokesman Rasmus Stoklund said no Syrians should be deported if they face danger.

All Syrians who have had their residence permits revoked have the right to appeal the decision, and several times a week, a three-judge panel in Copenhagen rules over those appeals. Those who exhausted all legal avenues are usually sent to deportation centers, such as the ones Mr Kurdi now lives in.

His centre, a former prison, is surrounded by fences and is under security and Mr Kurdi is only allowed to sleep outside the center twice a month.

Denmark aims to prevent asylum seekers from coming or staying, said Thomas Gammeltoft-Hansen, a Danish professor of refugee law at the University of Copenhagen.

“Indirect detention has become a systematic response of European states in relation to the current political crisis over asylum in Europe,” said Mr. Gameltoft-Hansen. “Denmark has been a leading runner and a source of inspiration to others.”

Other European countries have also tightened their policies on Syrian refugees. Germany has lifted a ban on deportation in Syria for those convicted of serious crimes, and Sweden has stopped granting residence permits to some Syrians.

But no one has gone as far as Denmark.

Most Syrians receiving residency permits in Denmark can stay for now, as the measures only affect those who arrived from the Damascus region. But Danish officials are now re-evaluating the security situation in other parts of Syria, which means thousands more could be at risk.

Denmark’s immigration ministry says about 400 Syrians have voluntarily returned home, and were offered $30,000 to leave.

Yet the more than 250 Syrians who had their residence permits revoked and filed appeals now live more than lose.

One of the winners of the appeal is Sami al-Dayeb, a 50-year-old factory worker in southern Denmark who fled Syria in 2014. A year later his wife and five children joined him and they bought a house in 2019. Shortly thereafter, Mr. al-Dayab lost his residence permit.

On a recent afternoon in Copenhagen, he emerged from Denmark’s refugee appeals board, pumping his fists in the air in victory. After drying his tears he called his master.

Government measures against Syrians have crystallized tensions between Danes who support anti-immigrant measures and those against them. According to a recent poll, nearly 80 percent of Danish voters now disapprove of the measures.

The country’s immigration minister, Mattias Tesfaye, told the European Parliament earlier this year that Denmark had to shield itself from problems caused by the integration of too many immigrants. He insisted that those who returned to the Damascus region would face no danger.

Mr Tesfaye declined multiple interview requests, but said in a statement that he was not responsible for security assessments of Syrian territories, nor for decisions on asylum applications.

For many people who have lost their residence permit, there is no question of going back to Syria.

“We won’t go back as long as Bashar is there,” said 51-year-old Syrian Asma al-Natoor, who was sent with her husband Omar to an asylum center in the northern city of Holstebro. “But we’ll go back as soon as he’s gone.”

Unlike deportation centres, the center in Holstebro is for newly arrived asylum seekers, or people such as Al-Netor who have appealed for their residence permits to be revoked and are awaiting a final decision.

The condition of the asylum center is better. Ms. and Mr. al-Natour owns a car, can study, and receives a monthly stipend of $320 each.

Denmark’s policies on refugees and asylum seekers have left many families divided.

Mr Kurdi’s 28-year-old son Mohamed, who is married to a Danish woman and has two daughters, obtained refugee status in Denmark because he is at risk of enlisting in the Syrian army. This means he can continue to live with his family in the suburbs of Copenhagen.

The Kairshovedgaard center, where Mr Kurdi is detained, houses about 250 people – some of them awaiting deportation to countries other than Syria. He is allowed to visit his family or lawyer twice a month.

On a recent visit to the centre, some of the common areas were full of garbage. Another center was infested with rats, according to photos seen by The New York Times.

Faced with no future in Denmark, Mr Kurdi tried to move to Germany last year, only to be rejected and sent back to Denmark. His son Mohamed said Mr Kurdi regretted his decision to move to Denmark.

“My dad has no future here,” he said. “He’s waiting for nothing.”