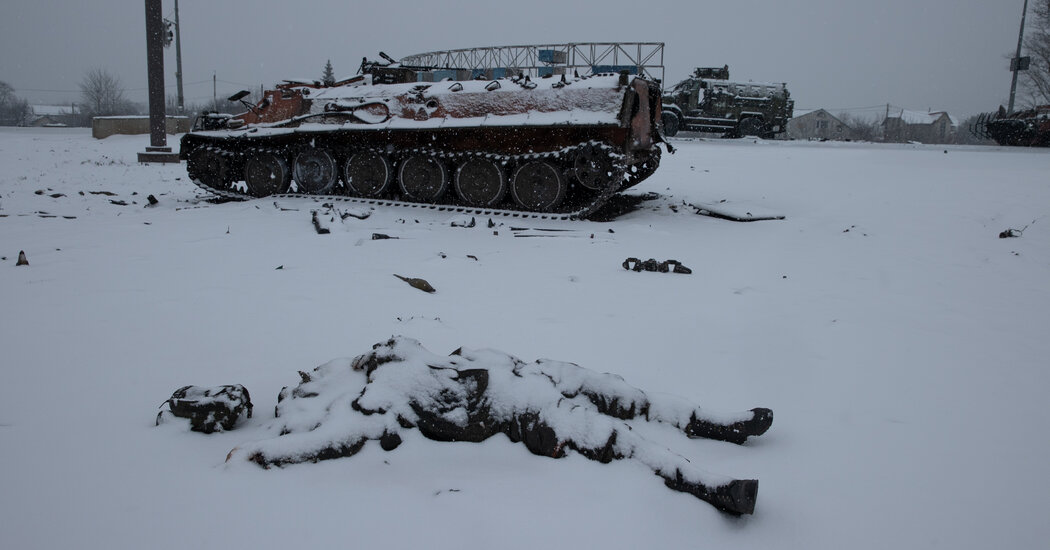 See photos on the ground in Ukraine

For weeks, a Russian invasion was anticipated by some Ukrainians and only sequenced at the leisure of the mind by others. But once the widespread attacks began on Thursday, with war raging in every corner of the country, for Ukrainians the war became inescapably tangible – a looming cloud of darkness that was once unimaginable in the post-Cold War era. was appearing.

Hearing the loud sounds of missile blasts and airstrikes, and reports of battles that killed civilians as well as soldiers, some put on a defiant face and vowed to fight the intruders however they could. However, most also felt that Russia had the advantage of tremendous power, and that life in Ukraine was very likely to be unstable and even treacherous for some time to come.

In some parts of the country, people cleaned grocery stores. They ran to the ATM to get their savings while they could. Tens of thousands, at the front end of the expected influx of refugees, waited in impossible lines for bus tickets or sat in their cars in monstrous traffic jams, all trying to head west, ideally NATO. Protected Poland.

The rest of the population could only wait to see what the Russians would do next, setting a military trap around the capital of Kiev. Photographers from the New York Times and those from other news organizations are scattered around Ukraine and have provided visual documents of a population dealing with the early stages of a national military offensive, which is grappling with renewed uncertainty and fear.

Below, Ukrainian soldiers at the entrance to Kharkiv, in the shadow of giant blue and yellow letters spelling the city’s name.

A Ukrainian military position outside Kharkiv.

Ukrainian emergency service officials in Kharkiv were trying to remove the body of a rocket fired by Russian forces on Friday.

Missiles hit a residential building in Kiev on Friday.

Clearing of debris after missiles hit a residential building in Kiev.

Remains of a downed plane in Kiev.

Ukrainian refugees leave the village of Medyka in Poland in a minibus after crossing the Ukraine-Poland border on Friday.

Ludmyla Viytovych with her daughters Sofia and Solomea at a temporary reception center at the train station in Przemysl, Przemysl. Mrs. Vietovich is traveling to Vienna where her family lives.

Ukrainian refugee pedestrians wait for transport from across the border when they reach Medika.

Military volunteers load magazines with ammunition at a weapons storage facility after the Ukrainian government announced it would hand over weapons to civilians to resist Russian aggression.

After an attack on a military air base in Chuguyev near Kharkiv on Thursday.

Families board evacuation trains in Kramatorsk on Thursday evening bound for Kiev and Lviv, the largest cities in western Ukraine.

Remains of a battleship piercing an apartment near Kharkiv.

Standing in line to withdraw cash in Severodnetsk.

Video: Families fleeing Thursday’s attack in Kiev were stuck in traffic for miles on the capital’s longest route, as they tried to avoid the advance of Russian troops.

Ukrainian military vehicles on the side of the road outside Severodnetsk.

Covering of bodies after the bombings in Chuguiv.

Packing luggage from an apartment to get away from the shelling in Kramatorsk.

According to the State Emergency Service, the crash site of the Ukrainian Armed Forces plane that was shot down in the Kiev region.

Praying at the Golden-Domed Monastery of St. Michael on Thursday in Kiev.

Russian attacks damaged radar arrays and other equipment at a Ukrainian military site outside Mariupol.

Waiting for trains out of town at the main station in Kramatorsk.

Evening in Kiev on Thursday. A US Defense Department official said Russian forces were moving towards the city.