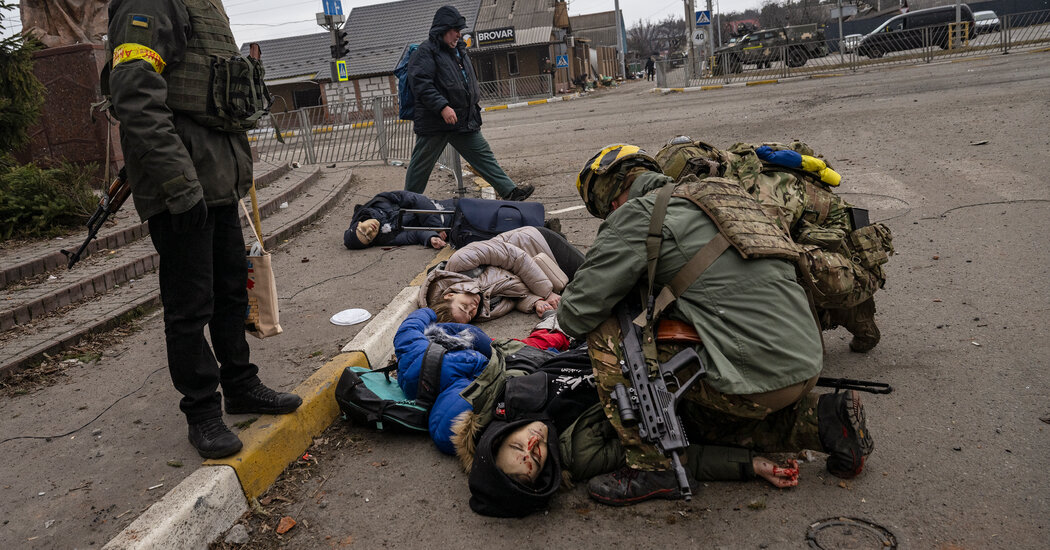 The picture has become a worldwide symbol of Russia’s brutality towards the citizens of Ukraine.

Four people lay near a crossroads in the Kyiv suburb of Irpin on Sunday. All were dead or soon will be by the force of Russian mortars. There was no Ukrainian army where the mortars landed, suggesting that Russia may have been targeting a civilian escape route near Kyiv.

If so, it was part of Russia’s larger campaign to demoralize Ukraine by killing and injuring civilians, a tactic that the Russian military has also used in Syria and Chechnya. Ukraine now endures these attacks every day, many of them unspecified.

However, in Irpin, a team of Times journalists were nearby when mortar shells landed, and one of them, Linsey Addario, took a photo of the family. “I thought, you know, it’s disrespectful to take a picture, but I have to take a picture — it’s a war crime,” Linsey told CBS Evening News. “I think it’s really important that people around the world see these images.”

In the days since the attack, my colleagues have reconstructed the lives of four victims: Tatiana Perebinis and her two children, 18-year-old Mykita and 9-year-old Alisa, with Anatoly Berezhnye, a 26-year-old church volunteer helping them to safety. are trying.

Tatiana Perebinis, who was an accountant, and her husband, Serhi, a computer programmer, had already survived the war in Ukraine once. Until 2014, they lived in eastern Ukraine, and fled to Kyiv after Russia instigated a separatist insurgency in the east.

“They met in high school, but reunited a couple of years later, on a dance floor in a Ukrainian nightclub,” my colleague Andrew Kramer from Kyiv reported this week after speaking with Serhi. “They owned a Chevrolet minivan and shared a country house with friends, and Ms. Perebinis was a devoted gardener and an avid skier.”

A few weeks ago, before the situation in Kyiv worsened, Tetiana’s company rented rooms in Poland and encouraged its employees to use them. But Tetiana didn’t want to leave until there were plans to evacuate her mother, who has Alzheimer’s disease. Finally, around 7 a.m. on Sunday morning, Tatiana and her children began their journey while Serhi was stranded in eastern Ukraine, caring for her ailing mother.

By Sunday morning, Tatiana, Mykita and Alisa had all been killed along with the church’s volunteer Berezhny. Berezhny took his wife to western Ukraine, but returned to Irpin himself to help the others evacuate.

The civilian death toll continued to rise yesterday as well.

See also  In the form of war, a struggle to balance energy shortages and the climate crisis

How ‘Encanto’ Became a Pop Hit

This week, the soundtrack to the Disney film “Encanto,” featuring “We Don’t Talk About Bruno” and other Lin-Manuel Miranda songs, spent its eighth week at #1 on Billboard’s album chart. But the soundtrack wasn’t always a smash, as Ben Sisario writes, and its newfound success sheds light on how fans drive hits through social media.

TikTok-to-streaming pipeline. After the film debuted on Disney+ in December, fans on TikTok started recreating scenes, dancing and singing. Soon after, “Bruno” and other songs from the soundtrack climbed in popularity on streaming platforms.

Radio is often behind the curve. “Bruno” was almost completely absent from the radio for most of the climb. Disney didn’t start promoting it on stations until late January, and it still gets a smattering of radio plays of songs by stars like Adele.

Videos enhance the experience. If you get bored with original songs, YouTube offers variety, including versions of “Bruno” translated into 21 languages ​​or mashed up with other pop songs. Clips on social media help reference the song in a way that radio play never could, writes Ben, and let fans re-live the film.