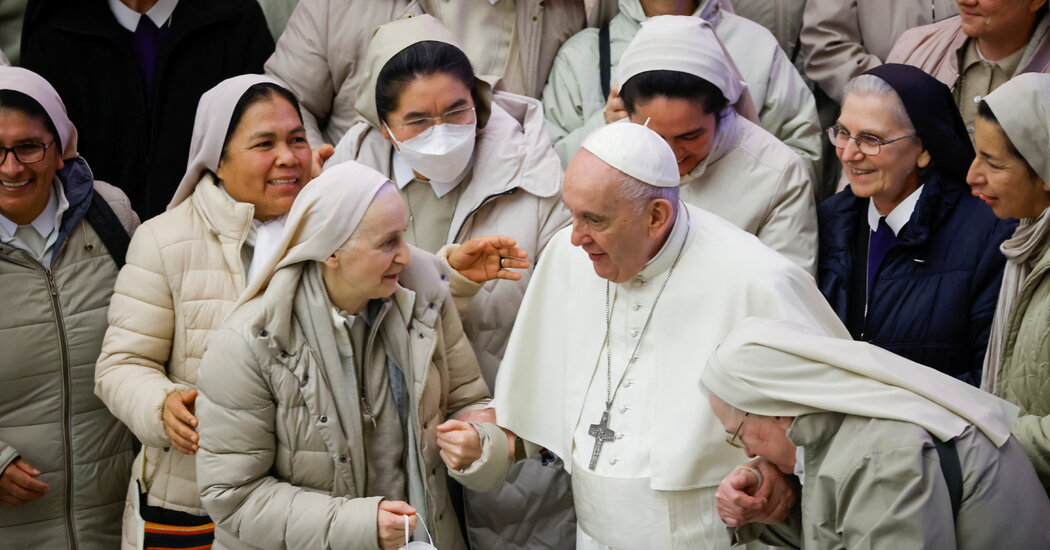 Rome: Pope Francis on Saturday issued a new constitution to govern the bureaucracy that runs the Roman Catholic Church, which has taken nearly a decade to create.

The constitution, running into 54 pages, stipulates that newly baptized Catholics, including women, could head the departments traditionally led by cardinals and the papal clergy commission in the government of the Church. can enhance institutional efforts to protect minors by including

The new text – titled “Predicate Evangelium,” or “Proclaiming the Gospel” – concludes a process that, over the years, has been introduced in a drip and drabs overhaul regarding the consolidation of Vatican finance and Vatican offices. This reflects Francis’ emphasis on a more pastoral and grounded church, and leaves a tangible mark on the functioning of the church.

The reform of the often cumbersome and out-of-touch Vatican bureaucracy, known as the Roman Curia, which governs a church of 1.3 billion believers, was a central impetus for Francis’ election in 2013.

The document, drafted by the top cardinals chosen by Francis, was issued on the ninth anniversary of his founding as pope. It explicitly states in its preamble that “the pope, bishop and other ordained ministers are not the sole evangelists in the Church,” making room for “the role of government and responsibility” for Catholics “the common man and the common women”. In another section, called “the Doctrine”, it states that the Pope may appoint any Catholic whom he deems qualified to head the Vatican office.

Church experts suggested that departments for bishops, who oversee bishops around the world, and clergy, which are related to church priests, would still require men to be leaders because only men could be priests.

The new constitution places Francis’ Abuse Commission inside a powerful doctrinal office that often opposed the panel’s recommendations. The new framework, the constitution says, would help the church “protect minors and vulnerable persons from sexual abuse”.

Cardinal Sean O’Malley, the Archbishop of Boston and chairman of the commission in question, has at times taken extraordinary steps against the hierarchy and criticized Francis for being deaf and misogynistic. But the cardinal called his commission’s inclusion in church government “an important step in upgrading the commission’s place and mandate”, which could only lead to a stronger culture of security in the Curia and the Church as a whole.

The constitution, signed and immediately published by Francis on Saturday, and in Italian only, will come into force on June 5, replacing the charter “Clergy Bonus,” or “Good Shepherd,” introduced in 1988 by Pope John Paul II.

Francis made it a tradition to hammer the leaders of the Roman Curia – usually in a major Christmastime address – for a number of sins, including being enamored of power and status and turning away from the faithful.

He has denounced the Kuria hierarchy as a self-critical, “house of terrible, bureaucratic customs”, plagued by “intrigues of small groups” who, instead of being “shepherds with the smell of sheep”, Puts himself and the priest above the parishioners.

The new constitution attempts to codify Francis’ view of the Church. It introduces changes to the service of the Pope at the center of the mission of the Curia – “nothing can be done before the head of the Institute of the Curia communicates to the Roman Pontifex,” it says at one point – as well as Serving and supporting bishops in local churches whom Francis sees as the lifeblood of the faith.

See also  In Ukraine, solidarity and defiance among those still in Kyiv

Vatican offices will continue to be streamlined, but at the same time undergo a new priority. After the powerful Secretary of State, the top billing will go to the new Decaustry for Evangelization, which combines previous office to support the Church in developing countries, and to rekindle faith in other countries where Catholics are a minority. is dedicated to. Already boasting a major Catholic presence. The new office comes “directly” under the Pope with the help of two princes.

Francis has repeatedly sought to place his pontificate within the continuation of the Second Vatican Council, the historic meeting of bishops in the 1960s that sought to embrace the modern world.

He has recently cracked down on the use of the Old Latin Rite in celebrating the Mass favored by traditionalists. Francis decided that they were divisive within the Church, as they promoted a view that undermines the legitimacy of the modern Church. The mission statement of the new constitution for Divine Worship and the Discipline of the Sacraments states that the office “promotes the Holy Liturgy in accordance with the renewal made by the Second Vatican Council.”