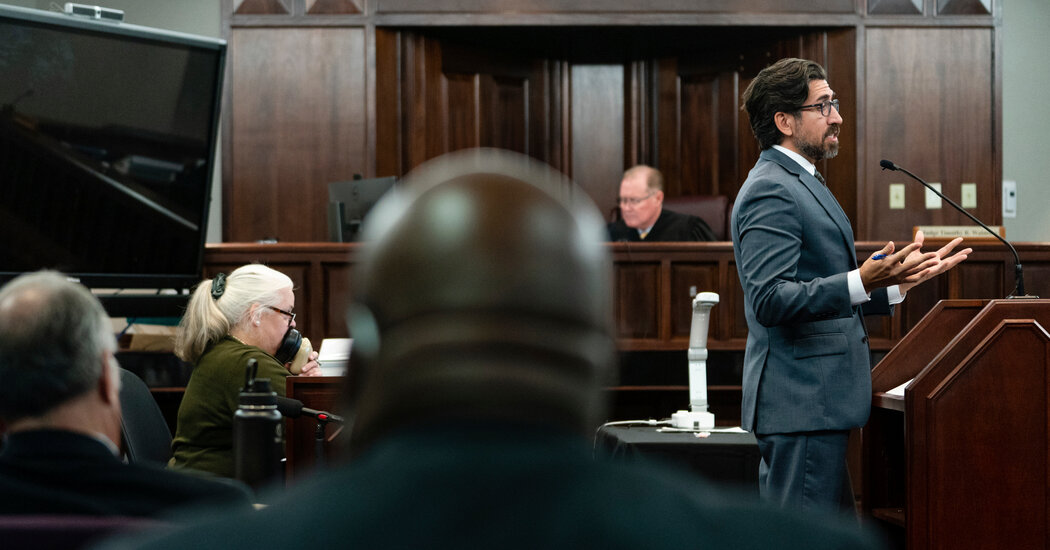 Only 1 Black Juror Selected in Trial in Ahmed Arbery Case

In February, 25-year-old Ahmaud Arbery was shot and killed in the neighborhood of Satila Shores, South Georgia. There were no arrests in the two months that followed. But local residents and lawmakers protested what they said was a deadly combination of racial profiling and flawed self-defense laws. “When they stop you, make sure you have your cameras turned on. Make sure you have a video.” Police eventually arrested the 2 suspects, but a few days later this video of the fatal shooting surfaced. Gregory McMichael and his son Travis were charged with murder and aggravated assault. The case has re-heated the national debate on racial violence. “I’m sure you’ve seen the news about Ahmaud Arbery.” “It looks like murder.” “The American public saw the video.” What really happened in the final moments of Mr. Arbery’s life? Using security camera footage, cellphone video and 911 calls and logs, The Times has reconstructed the crucial 12 minutes of Mr. Arbery’s appearance on Satilla Drive from his death, less than 300 yards away. Ahmed Arbery is less than 2 miles from his home at around 1 p.m. on February 23. A security camera at 219 Satilla Drive is recording When Mr. Arbery enters the frame at around 1:04 p.m. He will be jogging in the field, but he stops on the front lawn of 220 Satilla, the house across the street. Huh. Arbery looks around and wanders into the open construction site. Inside, security footage captures him briefly looking around. Meanwhile outside, a neighbor walks along Jones Road toward Satila Drive and calls 911. The neighbor waits on the side of the street. He will later tell the dispatcher that Arbery looks like a recent trespasser in the area. On several occasions before 23 February, several trespassers were caught on camera at 220 Satila. The owner repeatedly informed the police. On four occasions, what appears to be the same man was filmed. It’s unclear if it was Arbery, but even if it does, it doesn’t justify shooting him by neighbors across the street. The site owner says nothing was stolen from the home during these incidents or on February 23, and no property was ever damaged. But the neighbors were aware of the trespass and the community was on alert. Now, back to the day of the question. It’s 1:08 pm and Arbery is walking inside the house. Four minutes after entering, he walked out and ran. In the top corner of the security footage, we can see Travis McMichael’s house down the street at 230 Satilla. At 1:10, Travis and his father, Gregory, grab their guns, jump into a white truck, and leave the house to chase Mr. Arbery. We don’t have footage showing the next 3 minutes, but Gregory McMichael testified to police at the scene, and interviews with another witness, Roddy Bryan, indicate what happened. Gregory and Travis McMichael follow Arbery to Burford Road. Their neighbor Roddy Bryan watches on the chase, gets in his car and follows him. The McMichaels try to bite Arbery. Arbery doubles back and passes them. Bryan tries to block Arbery, but Arbery runs after him and toward Holmes Road. Gregory McMichael climbs out of the cab onto the bed of a handgun-equipped truck. We don’t know exactly what happens next. But Bryan and the McMichaels follow Arbery on Holmes Road. And we next see Arbery running away from Roddy Bryan and toward the McMichaels on Holmes Road at 1:14 p.m. Roddy Bryan is filming and – one caveat – these scenes are disturbing. Gregory McMichael currently dials 911. Let’s look back at it and see what happens. This is Arbery. He has been running away from vehicles for about 4 minutes. Travis stands by the driver’s side of a truck armed with a shotgun. Gregory is on the bed of the truck on the 911 call. Arbery doesn’t know where to run. He turns right, then left and then darts to the right of the vehicle. Arbery arrives in front of the truck. We see his white T-shirt through the windshield and here’s Travis leaning towards him now. It is immediately the first shot fired. Arbery is in the chest, his right lung, ribs and sternum are injured. Two youths had a fight over a gun. Gregory shouts: “Travis!” Arbery punches Travis. Gregory drops the cellphone in the back of the truck. A second blast breaks out of the frame. But we see gun smoke here. Arbery is bleeding heavily. He throws another punch. Travis fires one final shot, which hits Arbery in his left upper chest. Travis grabs his gun and walks away. Gregory grabs his .357 Magnum and gets off the truck. According to the police report, Gregory turned Arbery over to see if he had any weapons. He was not. Police officers arrive within seconds of the shooting, and a minute or so later at 1:16 p.m., Police Officer R. Minshaw reports: Two subjects on Holmes Road. shots fired. Men bleeding on the ground. The police took the testimony of Gregory McMichael and let the two men go. But now the McMichaels are both facing serious charges. Hi, this is Malachi and I reported this story. For transparency, a note about the security footage used in this video, first published by The Atlanta Journal Constitution. The timing code you are seeing here is wrong. We know this because what we saw in this video is lined up with what we heard in two 911 calls and we have confirmed the timing of those calls. These details and police logs also allowed us to determine that Gregory McMichael called 911 from his son’s phone just before the fatal shooting. So in this video we have used real time of events. thanks for watching.