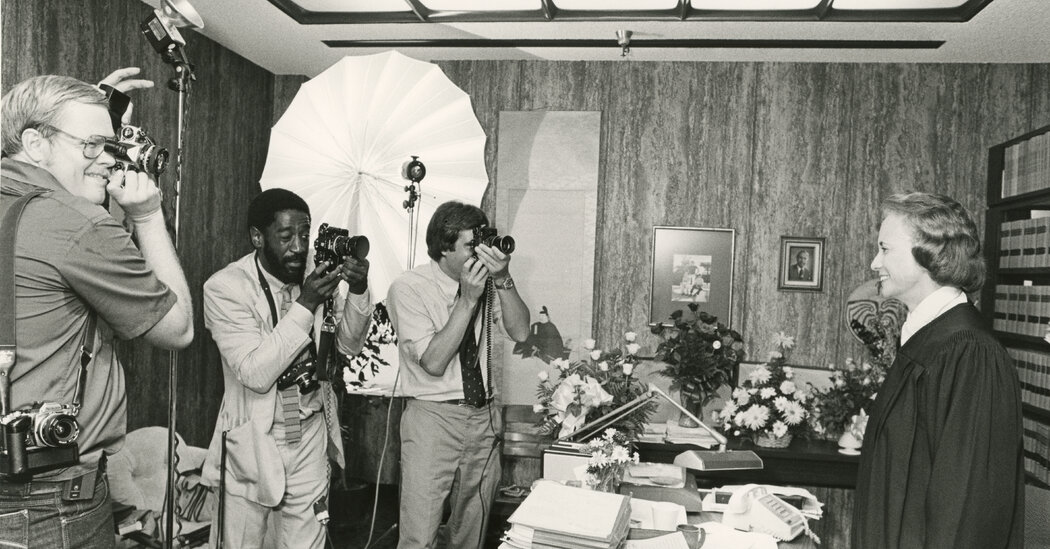 my father was a black photojournalist when very little

This article is also a weekly newspaper. Sign up for Race/Related Here,

A gorgeous pink sky is behind a trio of heavily-clad state policemen as the journalist, Oscar Jimenez, who is black, holds up his CNN press pass like a shield. I show my father a video taken during protests last year following the killing of George Floyd in Minneapolis. Mr. Jimenez speaks calmly into a microphone, explaining that he and his team will do whatever the police want. Instead, officers take out his microphone and hold hands behind his back. They refuse to explain why they are arresting him. They arrest its producer and its cameraman. The camera leaves the recording on the ground.

Seeing this footage gives me a newfound appreciation for the laminated press pass I’d find in the junk drawer at our apartment in Los Angeles when I was growing up, along with photos of my father, Lester Sloan, an Afro and a Playing different stages of the vintage dress. My father began his career as a cameraman for a CBS affiliate in Detroit in the late 1960s. When riots broke out in 1967, he brought a roll of film to the offices of the Detroit Free Press. The newspaper did not need help, but the editors sent it upstairs to Newsweek’s office. The magazine didn’t have many journalists willing to cover the rebellion, so someone typed in a note for them to use in lieu of a press pass. He kept it with him when he was out with his camera that night.

When I got them Mr. Jimenez’s arrest, my father recalls his time on assignment for Newsweek, “It was a terrible night,” he said. “What was horrifying about it was that all these people were, white, from the National Guard, somewhere in the Upper Peninsula or something like that, and they were as scared of me as I was to them. The difference was that they had guns. And all I had was a camera and a note.”

I have always been interested in the way my father’s identity as a black photojournalist manifested in his images. It is as if he is built like a 35mm camera, moving with a mirror behind his eyes, reflecting an inverted version of the society he was meant to document, with a subjectivity that has always been his The captions were not included with the pictures. When that turned to the negative for the 1967 uprising, Newsweek featured an image of a young black man with a smile on his face looking into the camera as a building was burning behind him. My father was worried that this man would be seen as a criminal. This feeling – that his lens could somehow compromise any dark subject – persisted throughout his career.

Before relocating to Los Angeles, he was filming a Black Panther march on Cass Avenue in downtown Detroit. A panther said to him, “Don’t point that thing at me, you’re working for the man.” “No man, I work for the news!” He insisted. But later he saw three suits in the office while watching that footage. When asked who they were, an aide said the FBI was looking into his outtake.

My father used to push against his editors whenever possible. When he was asked to photograph a “typical welfare mother” during the advent of the term “welfare queen,” he presented photographs of women who had been selected for him by a representative from a government agency—all white. The editor was furious.

“How can someone who represents a fraction of the population for the majority of women in this country on government aid?” He remembers, his voice raising an octave. His editor eventually gave the assignment to another photographer.

His identity gave him access to a special reality that a white journalist would not have the opportunity to see. He and his friend, Patrick Cole, a journalist, were in Berlin when the Wall fell. They joined a protest, becoming emotional when the crowd sang “We Shall Overcome”. One woman insisted that they join, “We learned from you,” my father recalled. But that anecdote was not included in any of the stories that went along with his images.

During the peak of the coronavirus pandemic, my father and I began to go through his extensive collection of photographs, and I recorded them as he told the story about him. I asked him about pictures I had never seen. We looked at photos of men raising their hands above their heads near the US-Mexico border, and at first, they pointed out how cordial the border patrol was. I got a little disappointed. I asked him if he felt complicit. “Associate?” He asked.

There’s a picture of two little girls looking behind them, on such a small, pitch black night. He thought for a while. Then he got angry. He talked about people from all over Europe living in Santa Monica who are not asked for their papers. He talked about the show of force that Border Patrol agents were building for him, for the press, when they were punishing a group of men only for having brown skin. He thought about his position, standing by those officers, documenting these arrests, given the fact that the police often followed him when he went from house to house at night.

Through these conversations, we gathered “Captioning the Archives,” which sounds like a memoir in the caption. He told me about National Geographic’s discovery magazine at a neighbor’s house as a child and about the time when Keith Richards joked with him for wearing a suit while covering the musician’s wedding to model Patti Hansen in Baja, Mexico. My father was often placed in an impossible position, forcing him to find his place among different notions of truth. He presented stories that reinvented the definitions of history for me.

Ayesha Sabatini Sloan is the author ofstream of light And “Dreaming of Ramadi in Detroit” And “borealis,” and with his father,Captioning Archives: A Conversation in Photographs and Text.” A 2020 recipient of the National Endowment for the Arts fellowship, she is an assistant professor of creative writing at the University of Michigan.

invite your friends.
Invite anyone to subscribe to the Race/Related newsletter. Or email your thoughts and suggestions to [email protected]