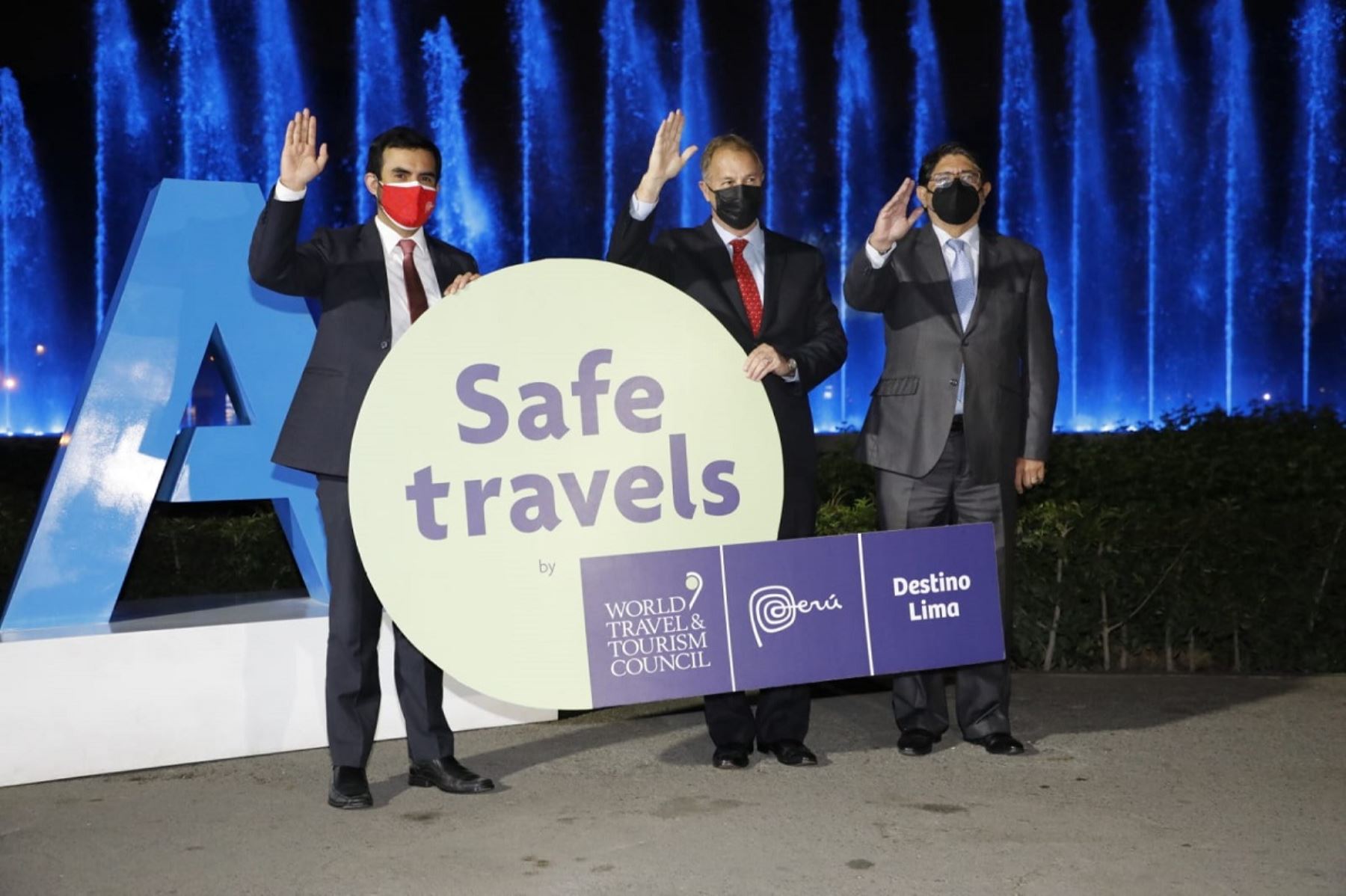 In order to continue with the process of reactivation of tourism in Peru, the Ministry of Foreign Trade and Tourism (Mincetur) delivered the seal “Safe Travels” to the tourist destination Lima, thereby ensuring compliance with all measures of biosecurity to receive visitors.

In a ceremony held in the Magic Water Circuit of the Reserve Park, on behalf of the Mincetur, the Vice Minister of Foreign Trade and in charge of Tourism, Diego Llosa, awarded this badge to the mayor of the Metropolitan Municipality of Lima (MML), Jorge Muñoz.

Vice Minister Llosa stressed that this recognition of Lima as a biosecure tourist destination symbolizes the joint work of the public and private sectors to advance tourism activity.

This fact has today, in addition, a greater meaning given that the World Tourism Day is commemorated.

“On such an important day as today (World Tourism Day), it is an honor to grant the Safe Travels seal to Destination Lima, which includes important historical, traditional and cultural attractions and a varied gastronomic offer. This distinctive, without a doubt, will allow to reestablish the confidence of the travelers and, to recover, in a gradual way, the tourism ”, he pointed out.

It should be noted that Vice Minister Diego Llosa delivered the Safe Travels seal to the Lima destination at the closing of the tourism fair: “Peruvian Routes: For a sustainable tourist reactivation”, organized by the MML and the National Chamber of Tourism (Canatur), where the president of said tourism union, Carlos Canales, and other representatives of the private sector were also present.

Transfer of functions in tourism

Within the framework of the central activity, Vice Minister Llosa also communicated the transfer of 17 functions in the field of tourism to the Metropolitan Municipality of Lima, enabling the commune to implement a sector policy and improve the management of the destination, in coordination with the 43 municipalities districts that make it up and institutionalize the exercise of functions in an articulated manner.

“As part of the decentralization process, the transfer of tourism functions to the Metropolitan Municipality of Lima seeks to recognize its work as the leading local government and manager of tourism development in the current stage of reactivation of the sector and to consolidate the positioning of the the city of Lima as a national and international tourist destination ”, he highlighted.

He also highlighted that this fact aims to contribute to the rapprochement of the administrations of Metropolitan Lima with their commune, in the management of procedures for categorization and certification of tourist services, promoting directly and constantly the eradication of informality in the sector.

It should be noted that among the functions transferred in terms of tourism are those related to promoting tourism development through taking advantage of the potential of Metropolitan Lima, identifying investment opportunities and areas of tourist interest, and declaring priority tourism development areas.

See also  Credit cards: how to use them and maintain good credit history? | News

The tourism fair “Peruvian Routes: For a sustainable tourist reactivation” opened on Friday, September 24, on the occasion of the activities for World Tourism Day, which is celebrated every September 27.

Likewise, the purpose of the fair was to raise awareness, promote and disseminate destinations, attractions and travel options in Lima and throughout Peru.

World Tourism Day has been celebrated every September 27 at the international level since 1980, when the World Tourism Organization (UNWTO) chose that date to disseminate the important role that this activity plays by promoting and integrating cultural, historical, economic and social values. , as well as joining efforts with the private sector for the fulfillment of the Sustainable Development Goals.

This 2021, the UNWTO declared this year as “Tourism for inclusive growth”.