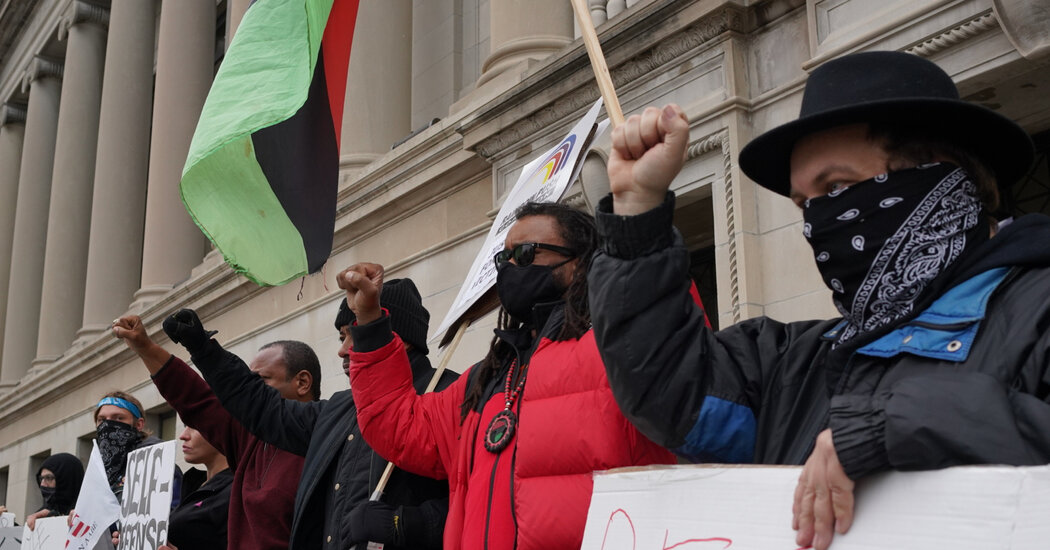 The self-defense claim made by Kyle Rittenhouse may hinge on the question of how justified the defendant’s action was under the circumstances.

On the night of August 25, 2020, when Mr Rittenhouse shot three people, two of whom died, he was accompanied by others who said they were on the streets guarding business premises.

Prosecutors used the testimony of several of those armed men to uncover how many went to Kenosha during that turbulent time and shot no one, while defense argued that none of those men faced trouble. Mr. Rittenhouse did not. Here’s what five of them told the court.

Mr. Black, now 20, dated Mr. Rittenhouse’s sister, and a year before the shooting became so close to Mr. Rittenhouse that they called each other brothers, Mr. Black testified. He faces charges of providing Mr Rittenhouse with a semiautomatic rifle used in the shooting, and said on the stand that he was testifying for prosecutors in hopes of a lighter sentence.

Mr. Black and Mr. Rittenhouse, then 17 years old, went downtown together on August 25, carrying their nearly identical military-style semi-automatic rifles. Prosecutors insisted that Mr. Black had stayed on the roof of a building in a used car lot they were both guarding, because they thought it would be safer than at street level, where Mr. Rittenhouse was.

An Army veteran in his early 30s who served in Iraq and Afghanistan, Mr. Balch testified that he went to Kenosha with a pistol and a semi-automatic rifle, which he had fired 10,000 to 15,000 times before.

Mr Balch walked with Mr Rittenhouse on the street on 25 August, and testified that he saw Mr Rittenhouse, whom he saw as “low facilities and inexperienced”.

On the stands, Mr Balch described the first person to shoot Mr Rittenhouse – 36-year-old Joseph Rosenbaum – as “ultra-aggressive” in the hours before the shooting. Mr Balch testified that he had heard Mr Rosenbaum threaten to kill Rittenhouse and others that night, but did not see Mr Rosenbaum hurt anyone.

A Marine Corps veteran who lives in Green Bay and knows Mr. Balch, Mr. Lakowski Mr Balch’s testimony that Mr Rosenbaum was belligerent, saying Mr Rosenbaum had challenged people to shoot him hours before he was killed.

Mr Lakowski testified, however, that he did not see Mr Rosenbaum as a threat. “I turned my back to him and ignored him,” said Mr. Lakowski on the stand.

Soon after the shooting, Mr. Lakowski helped Mr. Rittenhouse tie a tourniquet around the badly injured arm of one of the men who shot him: Gage Groskretz, who survived the episode and also testified at trial.

Ms. Fiedler, 56, who lives north of Milwaukee, was armed with a .380-caliber pistol and joined others guarding old cars. She said she hoped her gun would serve as a “deterrent.”

Like others, she testified that Mr. Rosenbaum had threatened people in the period before the shooting, but she also backed up the accounts of witnesses who said they did not consider her a serious threat to their own safety.

Mr Smith, 23, of Kenosha testified that he had previously worked in a used car lot, and that the owners told him to assemble a team of people to guard the lot – a team that included Mr Rittenhouse, Mr. . Black and others.

Mr Smith said Mr Rittenhouse had given him body armor and that Mr Smith had paper spray and a gun that shot paper-spray balls. As police pushed the protesters into the area of ​​the car lot, he said, Mr Balch handed them a pistol.