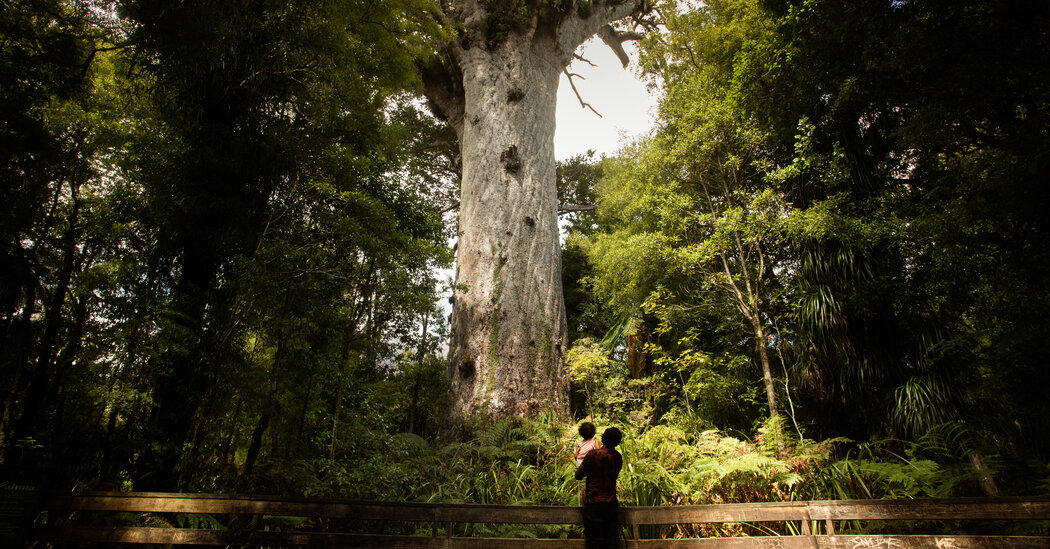 Wellington, New Zealand – In a pristine grove in northern New Zealand, the mighty conifer known as Tane mahuta, the lord of the forest, is under threat from encroachment by a deadly enemy.

It is the largest kauri tree known to have lived: 177 feet tall, 53 feet in circumference. Kauri, native to New Zealand, are among the world’s longest-living trees, and Tane mahuta has been growing in the Waipoua Forest for nearly 2,000 years—longer than New Zealand has been inhabited by humans. It is named after the god of forests in Māori mythology, who is said to have separated the heavenly father and the earth mother to create a place for life to flourish.

But Tane Mahuta stands just 200 feet away from another Kauri, whose roots are infected with an incurable disease. The death of kauri, caused by a microscopic, fungus-like organism, has reached epidemic proportions and pushed an already threatened species to near extinction. Five other Kauri are also infected nearby.

Given the age and size of the Kauri, many Māori view them as distant ancestors. Tane Mahuta is particularly special to some with regards to the Maori creation story. “The threat of kauri dying out for the species is a threat to Māori identity,” said Taoho Patuawa, chief science officer for the Te Roroa, a local Māori tribe.

Before it is too late, he is on the run to save the tribe and the other remaining Kauri. After more than a decade of government inaction and poor scientific research, Māori have led conservation efforts, hoping to find time to develop a cure.

Kauri dieback, discovered in 2006, is spread by movement of infected soil, often through mud on shoes. Once near the kauri, disease spores infect its roots, causing them to rot. The disease can infect other plant life, but it is particularly devastating to kauri.

When it reaches the trunk, the wounds break through. The Kauri starts bleeding yellow, pus-like gums in an attempt to cover their sides in thick armor. But it’s already too late. The pathogen destroys the internal tissues that carry nutrients and water, essentially killing the tree. When Kauri dies, most of the plant life around it depends on it.

Injection of phosphites can slow the progression of the disease, but there is no cure.

In 2017, Shane Jones, New Zealand’s Minister of Forestry at the time, described the government’s Kauri death response as “an ongoing disaster” up to that point. Experts predicted that the species, once spread across millions of acres in New Zealand, would be extinct within three decades.

Māori researchers, who are often more involved with communities affected by the kauri dieback, are unequivocally calling for action. Environmental sociologist Melanie Mark-Shadbolt said the government did not take Kauri’s death or the concerns of Māori seriously. The government’s biodiversity conservation system, she said, “doesn’t provide for Māori at all.”

Nick Waipara, a scientist specializing in kauri dieback, said the competitive system for scientific funding had directed money toward the preferences of non-Māori researchers.

For a decade, he said, work on the disease was “problematic, under-funded, piecemeal and ad hoc”.

The gap had disastrous consequences. Dr. Vaipara said, “I have seen with my own eyes, when we are doing long-term monitoring of plots, where in a few years we have not found a single seedling.”

Snow Ten, general manager of Te Roroa Development Group, said that around 2015 the tribe began to realize that not only did Kauri’s death posed a major threat to New Zealand’s forests, but that little help was in the way.

“We could have waited for something to happen, or we could have started rolling the ball ourselves,” said Mr. Tane.

So the tribe stationed Kauri ambassadors on the tracks and near the entrance of the forest to explain to the visitors the importance of the trees and to ensure that no one strayed too close to them. The tribe previously worked with the New Zealand Department of Conservation to set up a boardwalk near Tane Mahuta to prevent visitors from spreading infected soil near their roots. In 2018, after camera surveillance showed that dozens of people were still escaping the ambassadors and leaving the track to get closer to their trunk, the railing also went up.

The election of a centre-left government in 2017 also gave a boost. The new Biodiversity Minister, Damian O’Connor, pushed through stronger government policies on the Kauri dieback. According to Dr. Waipara and Ms. Mark-Shadbolt, this prompted institutions that fund scientific research to become more interested in Kauri solutions.

Stuart Anderson, deputy director general for biosafety at the Ministry of Primary Industries, said the agency is committed to working with Māori and noted that 8 million New Zealand dollars ($5.3 million) will be spent this year on kauri dieback, half directly to Māori groups. Will go in

However, even these measures seemed insufficient to fight the disease. So the Te Roroa tribe went ahead, exercising their authority as protectors of the Waipoua Forest, completely closing many of their walkways. When the government imposed a Covid-19 lockdown in 2020, Te Roroa took the opportunity to impose a temporary ban on rahui, or entry, throughout the forest.

These restrictions caused controversy. Dr Waipara said forest managers and scientists they knew had been violently threatened by people who opposed the restrictions or even denied the existence of the disease.

He compared it to the backlash against efforts to contain Covid-19. “There is similar issues, tension, threats, denial and quite appalling behavior by some people,” he said.

Nevertheless, monitoring by Te Roroa indicated that the sanctions were working. According to Mr Patuawa, Te Roroa’s chief science officer, they were only dealing with “decline in pockets of infected trees”. Te Roroa was content enough to lift his Rahui on Waipoua Forest later in 2020.

Mr. Patuawa cautioned that this would change if Kauri’s death spread closer to Tane Mahuta and other prominent Kauri.

“New Zealand needs to let go of the sense of entitlement that we have to be where we want to be,” he said. “We need to be a little more sensitive to these beautiful places.”

But, for now, there is hope among advocates that Māori-led interventions have given scientists enough time to save kauri. And even with the threat facing Tane Mahuta, Dr. Waipara said, “I think he’s in very good hands.”