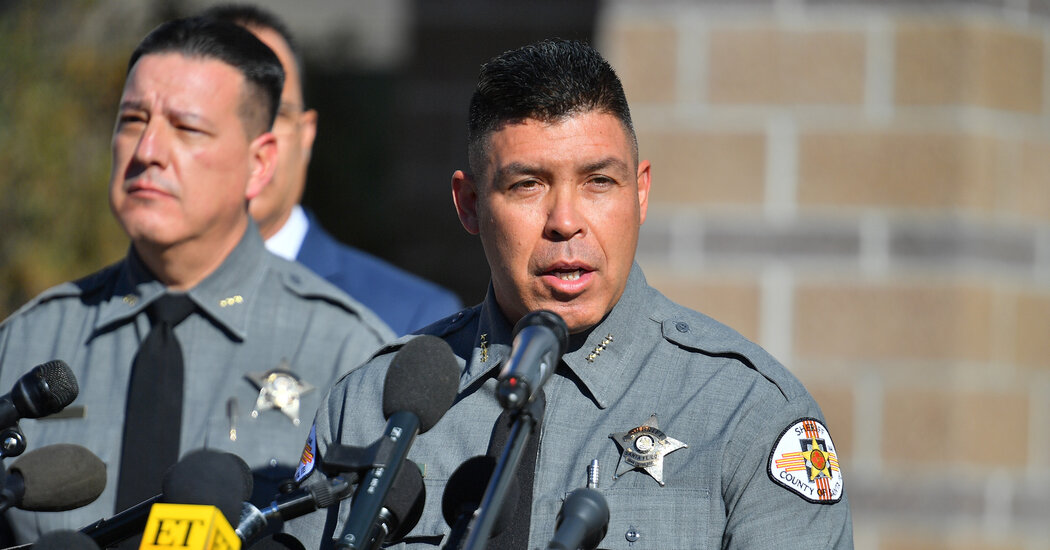 Santa Fe County Sheriff Adan Mendoza said at a news conference Wednesday that the lead projectile Alec Baldwin fired from a revolver on the set of the movie “Rust”, killing the film’s cinematographer and injuring its director , was recovered from the director’s shoulder, and added investigators believe he recovered more live rounds on set.

Investigators also believe they have recovered the Colt revolver that fired the shots, Sheriff Mendoza said, as well as about 500 rounds of ammunition from the set. The recovered ammunition includes blanks, dummy rounds and what the Sheriff’s Department suspects to be live ammunition, which it will send to the FBI crime laboratory for analysis.

“We have achieved what we consider to be a possible additional live round on set,” he said.

The sheriff declined to comment on how the ammunition was found; Generally, live rounds are not allowed anywhere on the sets of the film. He described the lethal gun as a .45 Long Colt revolver made by Italian manufacturer F.lli Pietta.

The shooting took place during a rehearsal for a scene in “Rust”, a western in which Mr Baldwin played a robber. Mr Baldwin was rehearsing a scene with a gun, he was told there was no live ammunition on the set, when it went off, killing the cinematographer, Helena Hutchins, and injuring director Joel Souza.

Sheriff Mendoza used the words “lead projectile” to describe what was recovered from Mr Souza’s shoulder, and said it was apparently the same round that killed Ms Hutchins. Asked if it was an actual bullet – and not an empty one – he said: “We would consider it a live bullet, a bullet, alive, because it fired from the weapon and apparently caused the death of Ms Hutchins. and injured Mr. Souza.”

For the past few days, questions are being raised as to how this deadly firing could have happened had the safety protocols been followed properly.

“I think there was some complacency on this set,” Sheriff Mendoza said. “Whenever firearms are involved, safety is paramount.”

Santa Fe County District Attorney, Mary Carmack-Altweiss, told a news conference that the investigation was ongoing, and criminal charges were still possible. “If the facts and the evidence and the law support the allegations, then I will launch the prosecution at that time,” she said.

Sheriff Mendoza said there were 16 people around where the fatal shooting took place, a set depicting a 19th-century wooden church. In all, there were around 100 people on the set, he said.

Sheriff Mendoza said all three men with guns were cooperating with law enforcement. According to court papers, the film’s weapon, Hannah Gutierrez-Reid, designed a table on which sat three guns; An assistant director of the film, Dave Halls, grabbed a revolver and declared it a “cold gun”, meaning it contained no live ammunition inside and was safe to handle. Then, Mr. Halls hands the gun to Mr. Baldwin, a detective who wrote in an affidavit that was used to obtain a search warrant.

Mr Baldwin was sitting in a wooden church pew, rehearsing a scene that involved a revolver “cross drawing” and pointing it at the camera lens, Mr Souza investigating the shooting, according to court papers. Told a detective doing it. When the gun went off, Ms. Hutchins was hit in the chest and Mr. Souza’s shoulder.

Mr Baldwin is “an active part of this investigation,” the sheriff said.

Detectives said they recovered three revolvers, spent shells and ammunition while executing search warrants on set – in boxes, loose and in a fanny pack, according to a list of items. The inventory did not specify what kind of ammunition was found on the set.