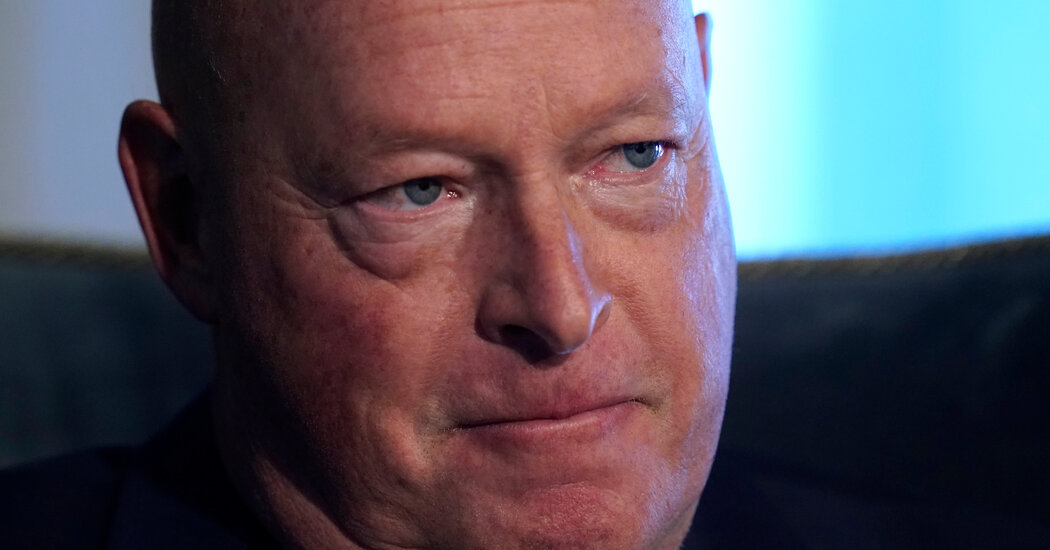 It was an injured Bob Chapek who came to Disney’s annual shareholder meeting on Wednesday — and it all led to a crisis of his own making.

Earlier in the week, the company’s chief executive Mr. Chapek sent an internal email to Disney employees. He was trying to explain Disney’s public silence on anti-LGBTQ legislation in Florida that activists have labeled the bill “Don’t Say Gay”. There was increasing internal pressure on Mr. Chapek to condemn the bill, especially since his predecessor, Robert A. Iger, already done on twitter And Disney employs 80,000 people in Florida. Instead, Mr Chapek’s nearly 1,000-word memo added fuel to the fire, and the hashtag #boycottdisney Was soon trending on social media.

Abigail Disney, granddaughter of one of Disney’s founders, “I’m so angry with Disney for thinking it might look the other way around,” wrote on twitter, Employees in some parts of the company – Lucasfilm in San Francisco, Walt Disney World in Florida – complained bitterly to managers. On Tuesday, the Animation Guild, which represents Hollywood animation artists, writers and technicians, called Mr Chapek’s decision to remain silent “a significant misstep” that “defies logic and the company’s ethics.” The Los Angeles Times skewered Mr. Chapek in an opinion column titled, “Disney Sets a New Standard for Corporate Cowardice.”

“While we have been strong supporters of the community for decades, I know many people are outraged that we did not raise our voice against the bill,” said Mr Chapek, who made his remarks off-camera during the virtual meeting . “We were opposed to the bill from the start, and we decided not to take a public position because we felt we might be more effective working behind the scenes with lawmakers on both sides of the aisle directly.”

Since that effort failed, Mr Chapek said, with the Florida legislature passing the bill on Tuesday, he had called on Governor Ron DeSantis earlier on Wednesday “to express our dismay and concern that if the law becomes law, So it can be used to unfairly target gay, lesbian, non-binary and transgender children and families.”

“The governor heard our concerns and agreed to meet with me and members of our LGBTQ+ senior team in Florida to discuss ways to address them,” Chapek said. Mr. DeSantis has voiced support for the bill in the past.

Mr Chapek also said that Disney will donate $5 million to LGTBQ organizations, including the Human Rights Campaign. “As I wrote to our employees earlier this week, we are committed to supporting community organizations like this so that they are better equipped to take on these fights,” he said. “In the meantime, we will also assess our approach to advocacy, including political charity in Florida.”

Before Mr. Chapek appeared, Susan Arnold, who succeeded Mr. Iger as Disney’s president (and who is one of the highest-ranking women in corporate America to live openly as a lesbian) Shareholder meeting of the company commenced. In prepared remarks, he praised the company’s profitability and growth, saying that Disney “strives to create a workplace in which all employees feel welcome and supported and contribute to the communities where we work.”

Then, in a premade video, an unusually friendly Mr. Chapek, smiling and wearing a light brown suit without a tie, spent more than 30 minutes acting as the cheerleader in chief. He heaped praise on recent achievements, including the opening of a new “Star Wars” attraction at Disney World, and teased upcoming offerings like the summer rollout of a new Disney cruise ship.

He then turned away from the camera and tried his best to execute a graceful exit from the “Don’t Say Gay” situation. “What matters is we as a company,” he said.

Mr. Chapek’s executive training wheels took off in December. For nearly two years, since Disney promoted him to CEO, he continued to answer to Mr. Iger, who remained acting chairman. Late last year, when Mr. Iger retired, Mr. Chapek finally had his chance to shine.

It started off well. Disney delivered a sensational quarterly earnings release on February 9, with investors stunned by the theme park’s profitability and the number of Disney+ subscribers. Then there was criticism about the Florida law.

The case gave Mr. Chapek his first serious trial by fire in a public relations case. It was kind of a shock, especially given the image-shining opportunity that Disney’s annual meeting could provide.

But his words on Wednesday seemed to at least quell the immediate heat on Disney, if not quench it completely.