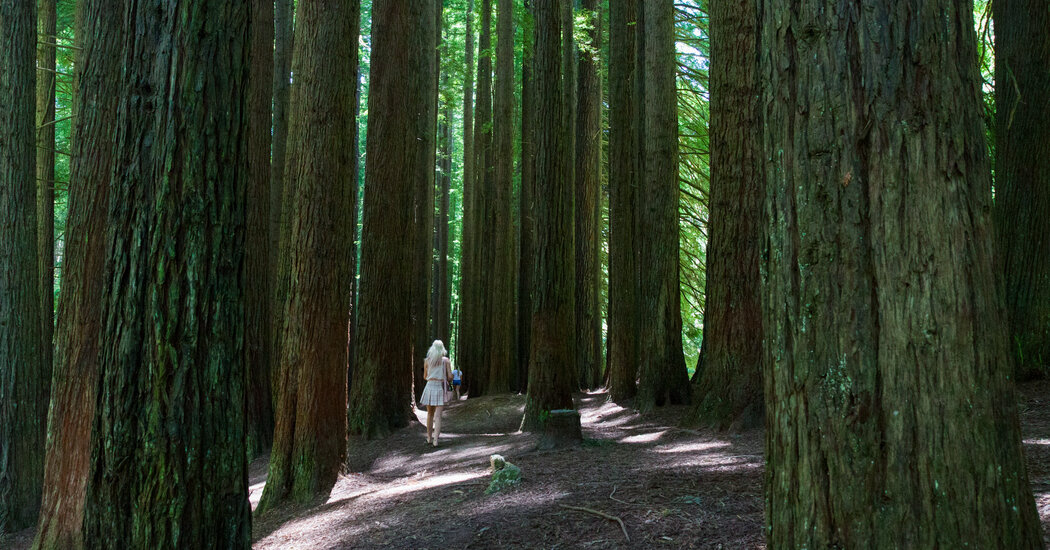 Climate change threatens spectacular redwoods, both here and in Afar

australia letter There is a weekly newsletter from our Australia Bureau. Sign up To receive it by email. This week’s issue is written by Meghan Dancy, a freelance reporter in Melbourne.

Formed by native eucalypts and ferns in a shady glade near Victoria’s famous Great Ocean Road, a group of California giants soar in the Australian sun.

In 1936, Victorian foresters planted a group of California redwoods—the tallest living species on Earth—to assess their viability for the commercial logging industry. They grew too slowly to become sustainable logging forage, so they were left alone so that they could drink in the nearby Aire River and grow taller than ever in the cold climate of Otway Range National Park.

But as the final weeks of devastating floods in New South Wales and Queensland have shown, environmental sustainability in Australia is no longer something to rely on.

The lives, wildlife and homes lost in floods present a clear picture of the disturbed climate cycle. This time La Nia, last time El Nio. The footage contrasting the 2019-20 Black Summer bush fires with this year’s floods paints a devastating picture of an Australia already living with the extremes of climate change.

Visiting a vast forest of redwoods, gives you a sense of strength and survival in the face of change. They can live for hundreds and even thousands of years under the right environmental conditions, which allow them to survive hot summers, cold winters, wet and dry climates.

Stephen Arndt, a researcher in the School of Ecosystem and Forest Sciences at the University of Melbourne, said trees such as the California redwood evolved in “very specific climates on the California coast.” They grow well in cool, moist conditions such as those found in the Otway Range, where they take the moisture in their leaves directly from the fog.

Professor Arndt said that while redwoods can withstand occasional heat waves and control “cold burning” by tapping into underground water sources, the increased fire risk from climate change posed an “existential threat”. Is.

This week, the Intergovernmental Panel on Climate Change released its sixth report on the current and future impacts of climate change. The 2,600-page report, seven years in the making, devotes an entire chapter to the dire effects of climate change in Australia. This suggests that the Earth is currently heading towards warming by more than 2 °C, driven primarily by the government’s slow disinvestment from fossil fuels.

A week ago, a United Nations report estimated that the global risk of highly devastating wildfires could rise by 57 percent by the end of the century. It predicts that extreme fires will increase in frequency and spread, even in areas previously unaffected by wildfires.

So what does this mean for the future of iconic tree species like redwoods?

When wildfires broke out in California’s oldest state park in 2020, old-growth redwoods among the oldest living trees on Earth went largely unscathed.

However, Professor Arndt said that as forest fires become more frequent and more severe, they are less likely to persist, with secondary effects of warmer, drier conditions as well as tree fires. The ability to bounce back also weakens.

Andrew McKinnon, chief ranger for Parks Victoria in the Colack Otway area, said there had not been a major fire in the area since the 1983 Ash Wednesday fire, which killed 75 people.

But Mr McKinnon said a catastrophic fire in the Otway area that blazed redwood stands “it doesn’t matter, but when,” as more natural disasters result from more severe climate cycles.

For now, California redwoods grow healthy and tall in their Australian home, competing for canopy space with the tallest flowering species in the world, the Australian mountain ash. Mr McKinnon said he believes growing tree populations outside of their native environment can act as a safeguard.

“Diversity needs to be maintained, ideally in its natural habitat, but if that natural habitat is being compromised, I think it’s imperative that we save that species.”

However, both Professor Arndt and Mr McKinnon agree that protecting survival is not an option, while it is still possible to do everything possible to combat climate change.

Now for this week’s stories: