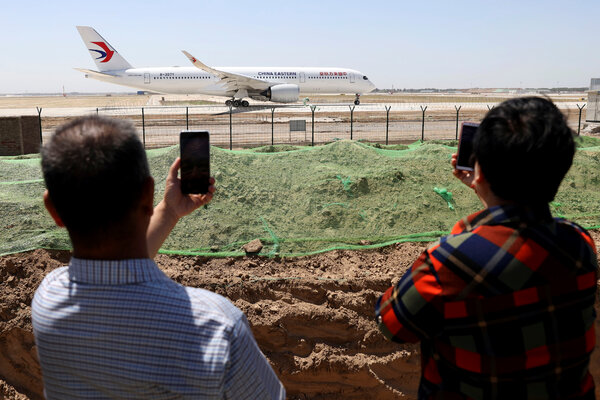 China’s Civil Aviation Administration confirmed that a passenger plane carrying more than 130 people crashed in a mountainous area in southern China on Monday afternoon, prompting rescuers to rush to a steep, heavily wooded site in the hope of finding survivors.

A Boeing 737 plane operated by Chinese Eastern Airlines went down in the Guangxi region, and flames and smoke could be seen rising from a hill, initial Chinese news reports said, according to photos and videos shared from the scene. . Later on Monday the fire was brought under control.

“The status of the casualties is unclear,” said an online report released by Chinese state television.

Residents of the area told reporters that the plane appeared to have been wrecked, dashing the hopes of survivors.

Initial reports said the plane, Flight 5735, crashed in Guangxi’s Teng County while flying from Kunming, a city in southwest China, to Guangzhou, a city in the far south of the country. According to the Civil Aviation Administration, there were 132 people on board, including 123 passengers and nine crew members. State media reports initially said 133 passengers were on board.

China’s top leader, Xi Jinping, immediately issued a statement calling on rescue workers to do their best and “handle the outcome appropriately”. The Chinese central government sent officials to the scene to deal with the disaster and investigate its causes.

Authorities in China have sent about 1,000 firefighters and 100 members of a local militia to the scene on a rescue operation. According to Guangxi’s fire department, 117 emergency personnel have arrived at the scene with about two dozen fire tenders.

The nearly seven-year-old aircraft was flying continuously on this flight until it suddenly lost altitude at around 2:20 pm, flight data indicated.

The plane was not a Boeing 737 MAX, a model that has not resumed flying in China after a ban prompted by fatal crashes in Indonesia in 2018 and Ethiopia in 2019. But Chinese airline companies have started placing new orders for Max after Chinese aviation authorities. It was indicated late last year that the model could resume flight after introducing some modifications and safety measures.

After a succession of fatal accidents in the 1990s, the crash could become one of China’s worst air disasters in many years. Over the past two decades, the country has set a relatively safe flight record, thanks to a young fleet of aircraft and tight air controls.

The China News Service reported that firefighters in Teng County were first alerted to a possible flight accident in the afternoon after villagers reported they had found debris from a plane.