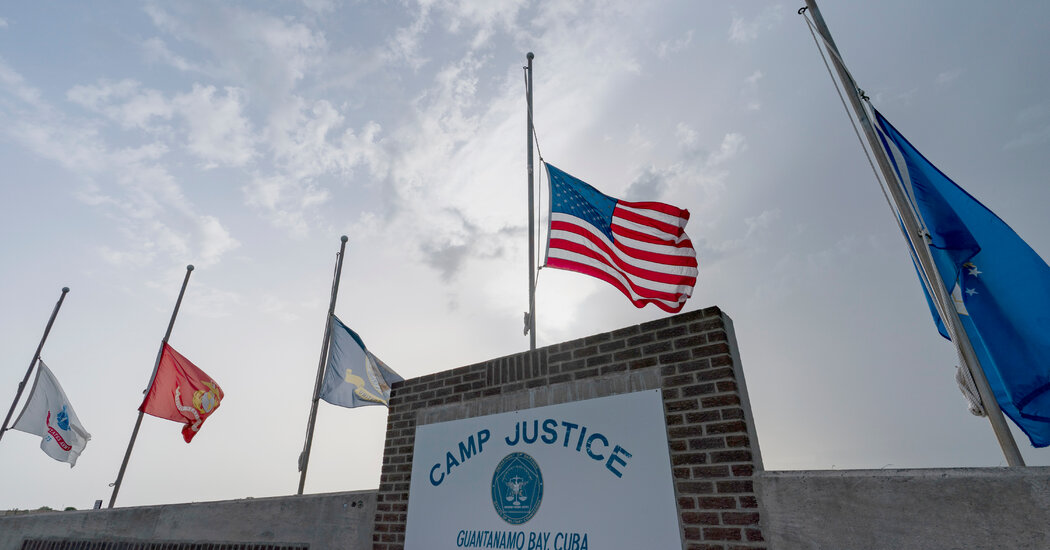 GUANTÁNAMO BAY, Cuba — In a day-long military effort to formally charge three Southeast Asian men held by the United States for 18 years, as well as plotting the deadly terrorist bombings in Indonesia in 2002 and 2003 There were delays in translation and interpretation problems on Monday.

Prosecutors charged three prisoners – Ansep Nurjaman, better known as Hambali; Mohamed Nazir bin Lep; and Mohammed Farik bin Amin – of murder, terrorism and conspiracy in the 2002 nightclub bombings in Bialik, in which 202 people were killed, and the 2003 bombing at the Marriott Hotel in Jakarta killed at least 11 people and injured at least 80.

Defense lawyers have called them torture victims who spent nearly three years in a secret CIA prison network, where agents use waterboarding, sleep deprivation, beatings, painful handcuffs and other “enhanced interrogation” techniques to extract information from their captives. used.

In 2003, a CIA interrogator told Mr. Hambali that he would never go to court because, according to a study of the CIA program released by Senate Intelligence, “we can never tell the world what I did to you” in December 2014. committee in

Monday’s formal charging was a crossroads of sorts, the start of proceedings in a case that was commissioned by the Trump administration on January 21, the first full day of President Biden’s administration – and was postponed for six months by pandemic restrictions. .

The proceedings came to an end in the aftermath of the September 11 attacks, the latest example of delays in Guantanamo’s justice system nearly 20 years after they were selected in a global effort to capture and track down terrorists.

All three men have been in United States custody since 2003, and are held in Guantanamo as members of the Southeast Asian extremist group Jemaah Islamia. Mr. Hambali, who is Indonesian, but associated himself with Osama bin Laden’s global jihad and Mr. Bin Amin and Mr. Bin Lep, former architecture students who met in college in Malaysia, were trained in Qaida camps in Afghanistan. charged with sending.

Translation and technical issues were obvious in the beginning. A lawyer reported that a prisoner had mentioned “Google” in a commentary in Malay to the judge, but the court’s interpreter did not mention the search engine in the English translation. The Indonesian translator changed “legal training” in English to “training legal” in Bahasa Indonesian.

Defense lawyers said with alarm that the three defendants had called a “Mr. Singh,” a translator with whom they both had confidential conversations, as they prepared to seek release through a review board hearing, Monday. Ko sat next to the chief prosecutor in court, now working for the prosecution.

Lawyers for the three prisoners also told the judge that the court’s official Indonesian translator in 2020 was of the opinion that “the government is wasting money on these terrorists; He should have been killed long ago,” and said he had an affidavit from a witness who had heard the remarks. Prosecutors are seeking a life sentence in the case.

Trial Judge, Navy Commander. Hayes C. Larsen attempted to rectify the problems. He gave the official translation team of the court a 10-minute break every 20 minutes. He told defense lawyers that if they believe there are interpretation problems, they need to be resolved. And he adjourned the reading of the charges until Tuesday, which was due for Monday’s hearing.

Defense attorneys, both civilian and military, and those paid by the Pentagon all described the case as still in its infancy. Prosecutors, he said, provided perhaps 2 percent of pretrial documents that could have been used in the case, including accounts of interrogation by the FBI in 2007 with prisoners being transferred from CIA prosecutors to military custody.

Mr. Hambali’s lawyer, James R. Hodes called the case “absurd” because of the length of his client’s custody and the nearly two-decade delay in filing charges against him. He told reporters before the hearing that Mr Hambali had been “bruised” and spent at least half of his custody in solitary confinement. He said the prisoner was to “apologize” and be repatriated, “not to be caged in a Caribbean island.”

Hearings in Guantanamo have been mostly between English and Arabic, but translation problems have also been encountered. In 2015, one of the men accused of plotting the September 11 attacks blew up a translator’s name in court—and revealed that the linguist had previously worked for the CIA at a black site, revealing his identity and Derailed a week’s hearing. .

Finding American translators with top-secret security clearances who speak Southeast Asian languages ​​has clearly proved to be more than a challenge. A Senate study of the CIA’s interrogation program cited a cable from a secret detention site in January 2004 that reported Mr. Bin Lep’s “English is very poor, and we don’t have a Malay linguist.”