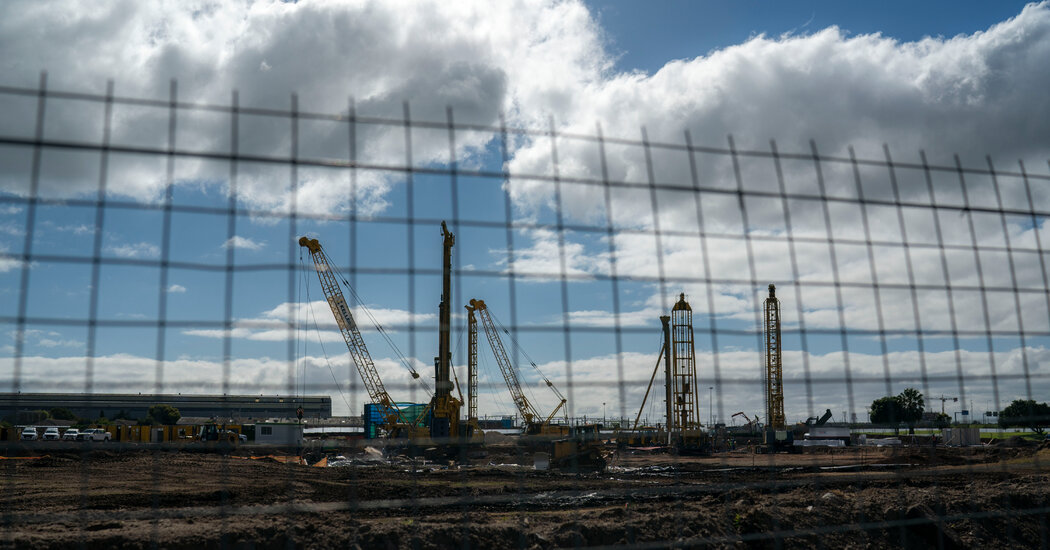 JOHANNESBURG — Plans to build an African headquarters for tech giant Amazon in Cape Town are in jeopardy after a judge ordered a halt to construction on Friday, arguing that the developers had not properly consulted indigenous South Africans.

The $300 million development sparked a nasty tussle within Indigenous, or First Nations, communities over whether many considered the Holy Land to profane their history and culture, or to uplift it, as the developer built an indigenous heritage center. promised to include

Western Cape High Court judge, Patricia Goliath, found that the developer had exacerbated divisions by engaging in a partisan consultation process that excluded many indigenous groups.

“The fundamental right to the culture and heritage of indigenous groups,” she wrote, “was under threat in the absence of proper consultation.”

The site of the development was until recently a golf course and driving range called The River Club. Although First Nations groups differ on what happened at that exact location, there is general agreement that it is related to a wider area where their ancestors fought the first colonial invaders, and where the first colonial lands were stolen in South Africa. .

Construction began last year after city and Western Cape provincial authorities approved the project, despite concerns raised by some government agencies that the developers had not adequately taken into account the views of the indigenous people, or that the way the development was planned for the site. Legacy will reduce the value.

A First Nations organization and a local residents’ union filed a lawsuit to overturn the approval of city and provincial officials. He also asked a judge to stop the construction while the matter was pending.

See also  Meta Cuts Back on Some of Facebook's Perks

In his 79-page ruling, Judge Goliath said that if a judge finds that the approvals were unreasonable, it would be difficult for the parties filing suit to obtain reasonable relief if the development was at an advanced stage. It not only said that construction would have to be stopped, but also that the developer would have to consult further with the indigenous people.

The court must still review decisions by city and province approving the development to determine whether they are legally valid.

A statement issued by the property’s owner, Lisbeek Leisure Property Trust, said he was “deeply disappointed” by the judge’s decision and was considering his legal options.

An Amazon spokesperson did not respond to requests for comment.

As the controversy has raged over the years, Amazon has remained silent. During a court hearing in January, a lawyer for the trust said a delay in construction would inevitably kill the project as Amazon is likely to pull out as the anchor tenant.

Last year, Cape Town officials chose Amazon as their city’s “base of operations on the African continent”. He said that the company will create employment and strengthen the region as a tech hub.

Judge Goliath was not impressed by that argument.

“This matter ultimately pertains to the rights of indigenous peoples,” she wrote. “The fact that development has substantial economic, infrastructural and public benefits can never override the fundamental rights of First Nations peoples.”

The Western Cape’s Chief Heritage Authority said developers had not done enough to include indigenous peoples, a group called the First Nations Collective formed in mid-2019 in favor of development. Its leaders said they worked with the developers and asked them to agree to build a heritage center and other facilities honoring First Nations peoples as part of the project.

The collective was a broad coalition of First Nations groups, said one of its leaders, Zenzile Khoisan, a consultation with the developer was effective. The collective intends to appeal the judge’s decision and “now intensify the fight”, he said.

While Judge Goliath said she was not objecting to her support for collectivization and development, she wrote that the developer had commissioned a report that relied mostly on collective views, while ignoring other indigenous peoples who had developed was opposed to.

“The current tensions between First Nations groups reinforce the need for meaningful engagement and appropriate consultation,” she wrote.