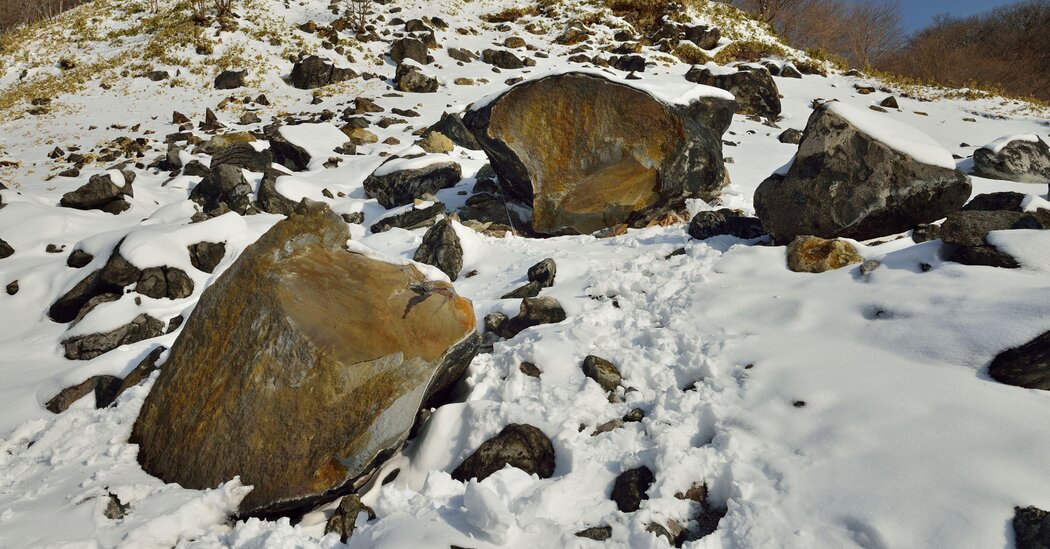 A ‘murder stone’ has been broken in Japan. Is a demon loose?

There’s so much going wrong in the world, should we even worry about the nine-tailed fox demon that might come loose in a forest in Japan?

The answer partly depends on your reading of ancient Japanese mythology.

This month, a volcanic rock split in two in Nikko National Park, about 100 miles north of Tokyo. According to a guide at the park, the rock was about six feet long and 26 feet in circumference. It has long been associated with a Japanese legend in which the spirit of an evil fox hunts the “killing stone” or seisho-seki in Japanese, making it fatal to humans. Some have speculated that the fracture loosened the fox causing further damage.

Others have focused on a variation of the legend that ends on a happy note. In that narration, after a Zen monk splits the rock into several pieces and drives the fox out, she promises that she will never harm humans again.

There are a lot of theories floating around in social media about what a stone fracture means for normal humans. So does the Japanese news media. “Is this an advance warning of some calamity or a good omen?” asked in a recent article in The Asahi Shimbun, an influential newspaper.

Nick Kapur, professor of Japanese history at Rutgers University, said the growing interest in the fractured stone could be a sign of our times. twitter thread About this in early March.

“There’s a kind of millennial spirit in the air, an apocalyptic spirit, with the coronavirus and this war in Ukraine,” he said in an interview. “People are feeling, ‘Ah, why is all this happening now?’ And so maybe this stone that was uncovered at this particular time just touched a nerve.”

‘A kind of antihero’

The legend of the nine-tailed fox is set in the 12th century at the imperial court of Japan’s imperial capital, Kyoto. Scholars say that it first appeared in written texts in the 15th century.

In the original version, a retired emperor, Toba, a real historical figure, is enchanted by Tamam no Mai, a handsome and intelligent visitor. When Toba falls mortally ill, a royal fortune teller learns that the visitor is an evil fox in disguise. She flees into the forest, and warriors sent from the palace shoot her with arrows, turning her into a poisonous rock.

In real life, Toba’s death triggered a succession crisis that led to an era of samurai fighting and military rule. In a 1997 essay about foxes in Japanese culture, scholar Janet Goff wrote, “In all likelihood, the story of Tamamo no Mai derives from the real world of palace politics.”

In another version of the legend – one that appears in ancient plays and illustrated scrolls – a Zen monk is walking behind a stone when a woman warns him not to approach it. She says it will kill any human, bird or animal.

The woman accepts that she is a stone spirit and disappears inside him. When the monk strikes and breaks the stone with a staff, she reappears, promising that she will never harm humans again, and disappears for good.

Professor Kapur said that for centuries, the fox legend was a misinterpretation of Japanese mythology, which attributed female characters to the downfall of dynasties. But when the nine-tailed fox appears in modern Japanese cultural products – including anime, manga and even video games – it is portrayed more favorably.

“There’s still a hint of evil there, but he’s kind of an antagonist, maybe,” he said. “It’s interesting how this character has transformed from an unremarkable villain to almost someone you admire or want to be friends with.”

Broken stone sat in a dotted forest in Nikko National Park sulfur hot Springs. Park rangers had been photographing cracks in the stone for years, and local officials said the final rupture was caused by toxic gas and rainwater seeping in.

“The stone is a government-designated cultural property, so we can’t decide for ourselves what to do,” said Riko Kitahara, a park official. “But from a maintenance standpoint, we think it should be discarded because it naturally splits.”

The Nikk stone was designated as a cultural asset by Tochigi Prefecture in 1957 and a sightseeing site by the national government in 2014. It is one of several stones that were made by a Zen monk when he broke a large stone during their mythical encounter. With the spirit of the holy fox.

Sarkar says that the 17th-century poet Matsuo Basho was referring to the stone when he wrote of a stone that emitted poisonous smoke and surrounded the ground “so covered with dead bees and butterflies” That you can barely see the color of the sand.”

Masahru Sugawara, 83, a volunteer tour guide in Nikko National Park, said the poet’s reference to the stone has long been a selling point for tourists. He said that animals that move to hot springs near stone in winter sometimes die from the toxic gases.

“As Matsuo Basho wrote, it’s a scary place,” he said.

A fox for our time?

It’s unfortunate to discuss bad luck in Japan, so if people are concerned that breaking a stone will create a bad vibration, they probably aren’t telling reporters.

Publicly, at least, many have said that they believe the breaking of a stone is a good sign, not an omen of impending doom. Some have even expressed the hope that at this chaotic juncture of history the world may have exactly what the world needs.

In a recent Facebook post, a tourism association in the Nikko region said it hoped the stone fracture was an “auspicious forerunner” and that the nine-tailed fox may “tame the coronavirus and the current world situation”. “

Masaki Akutsu, an official from Nasu, a town near the park, told The Asahi Shimbun that he hopes the fox has been freed to ward off global warming.

“This is the beginning of a new killing stone legend,” he said.

Masako Hitomi, 80, whose husband is a retired Shinto priest at a temple in Nasu that pays tribute to the fox, said he believes in a scientific explanation for the stone’s fracture.

At the same time, she said, all the bland news recently, including the war and pandemic in Ukraine, played a part in the fate of the stone. (On Wednesday, a powerful underwater earthquake in Japan’s Fukushima region, north of Nasu, killed at least three people and injured more than 190.)

“It broke a lot of the world’s woes,” she said. “Since the stone shouldered the evils, I hope that all these terrible events will soon come to an end.”